This week we had results out of Magazine Luiza (11/11) and Via Varejo (last night after close) and following B2W at the end of October. This pulls together Q3s for the big players in Brazilian E-commerce, all of whom have either aspirations to move into payments, wallets and the broader Fintech space.

Following the Covid-driven expansion in Q3 it will be interesting to see whether the normally seasonally strong Q4s (Black Friday, Christmas) can maintain the pace of GMV. We pick up on competition and logistics as focus areas but note that MELI management feels the business in Brazil is in better shape to push more aggressively during the promotional periods; MELI hasn't historically engaged so aggressively over these periods.

Meanwhile, with PIX launching on Monday, this will only further focus interest on wallets/Apps and broader Fintech opportunities.

We knew GMV was trending well in Q3 and saw strong sequential expansion from all operators with the exception of Via Varejo, which is still only beginning to ramp up 3P. MGLU numbers had included an acquisition (Netshoes) through to Q2 2020 but the sector leading Q3 performance (y/y and q/q) was “clean”. We have seen MELI growth recover off the lows of 2019 and early 2020 and the 78% GMV growth implies sequential share gains of ~2pp (growing a touch less but bigger in absolute terms) and shows a business back on a firmer footing. For reference, Ebit-Nielsen references 48% on-line growth in Q3 for Brazilian GMV, although we always struggle to reconcile this with the largest reporting companies; we show how the “Big 4” have trended below.

GMV by operator for Q3 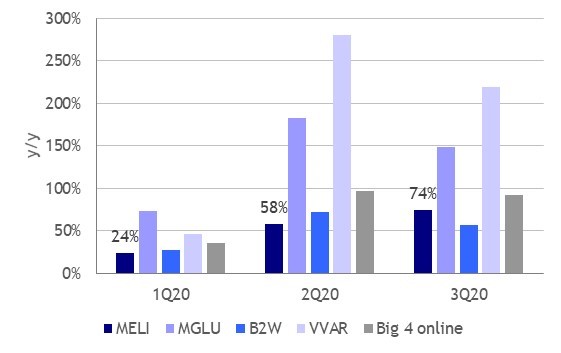 A lot of focus on the space continues to be around 1P versus 3P - a debate in part which is wrapped into the shift into higher growth verticals of groceries and other CPGs – which in turn have flourished under the pandemic conditions. Investors appear to be working out which is better. It’s an important discussion for MELI given >95% of its business is still marketplace and it competes primarily with operators who were historically 1P.

MGLU called out 1/ groceries, 2/ cosmetics and 3/ fashion as the key growth verticals in Brazilian e-commerce today. Although there is inevitably strong competition in these growth areas (causing investors some concern in this regard), the on-line penetration of groceries for example is <1% (according to B2W) whilst durables penetration is comparable with Developed Markets (MGLU) and electronics is nearer to 20% (B2W).

One of the reasons for MELI’s push into 1P – where the first mile doesn’t need navigating – is to potentially improve delivery times in verticals where speed matters more. “Ship from store” is obviously helpful in the groceries vertical for instance for existing bricks and mortar retailers, although MGLU conceded that adaptations need to be made to stores and this vertical is still very much a work in progress.

MELI is slowly increasing its 1P efforts but has suggested it is unlikely to get into double digits as a contribution. Still, even this shift provides flexibility to better address these verticals (as well as compete more effectively generally around promotions, which will be key for Q4 where MELI intends to push harder). Also crucial is updating the front-end, hence MELI’s investment in its Super Mercado store fronts.

B2W and MGLU continue to focus growing both 3P and 1P (“we’re channel agnostic” - MGLU) and for sure 3P has a role to play in groceries and CPG, with B2W focusing on on-boarding supermarkets onto its marketplace platform. B2W is also making ongoing investments into fulfillment centres (an extra 5 automated, taking the total to 12 automated out of 20). So, there is no sense really that 1P-origin players can rest on their laurels.

Of all the E-commerce operators it is MGLU (even more so than MELI) which continues (and as per the Q3 call) to speak most enthusiastically about building a “Super App” and referencing the Chinese model. MELI, while very keen to push in this direction, backs away from this terminology. MGLU integrates Magalu Pay into its E-commerce App, incorporating the essence of the “one-stop shop” model employed by Alipay and WeChat. Mercado Pago is distinct from the MELI e-commerce App.

In driving App engagement, frequent usage is key and in this sense food (and other lower ticket verticals) are supportive. MGLU’s food delivery service, AiQFome, was flagged as being integrated into the App as a good example of this. Magalu Pay has had 2m downloads.

Data on App usage is still scarce, with B2W’s very popular Ame having had 12.5m downloads and that, two years after launch, TPV is R$1.1bn (in June 2020) - although this is mostly transfers and monetisation is likely to be low - almost identical to the level reported by MELI for Q3. Ame claims 55 different functions on the App. 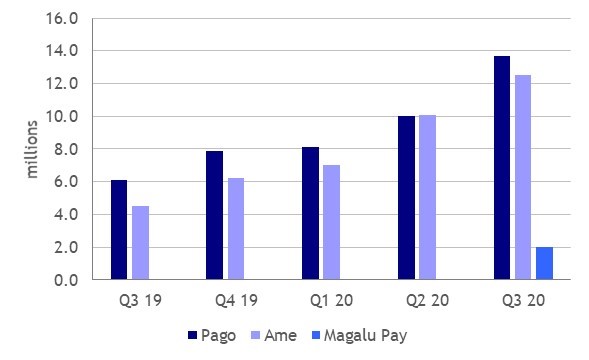 As a reminder, PIX finally launches on Monday 16th in Brazil. This is likely to both drive E-commerce GMV and TPV and App engagement in the coming months and years, as well as putting pressure on take-rates.

PIX summary (taken from our our Initiation note) 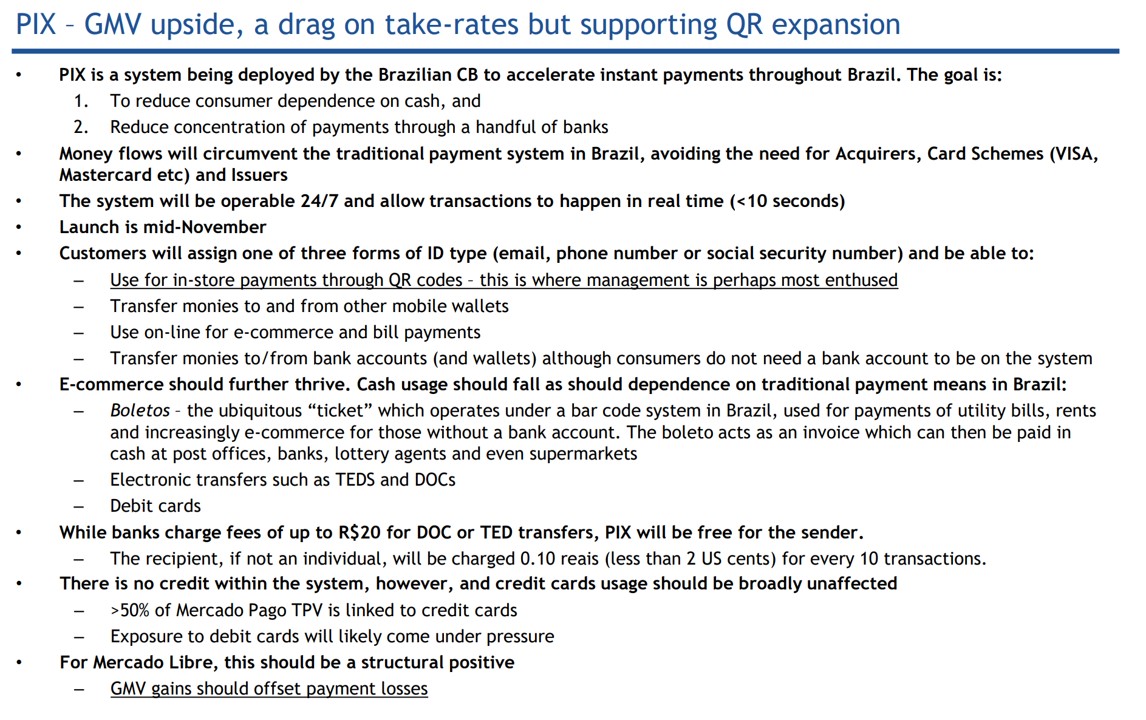 If the aim of the App is monetisation through Credit, Q3 saw some positive developments. As we discussed at the time, Mercado Credito saw a nice step up in loan origination – with consumer loans stepping up the most. 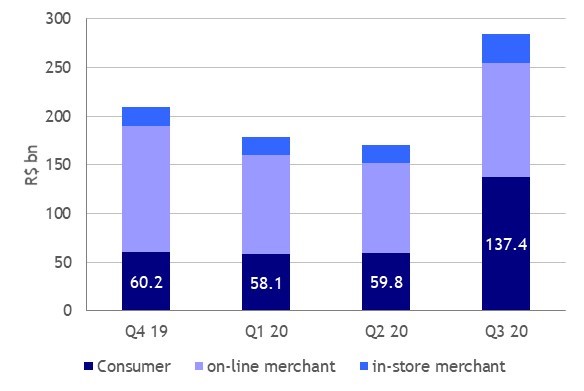 MGLU’s Luizacred (a JV with Itau which has been around for years; a credit card service rather than a wallet-based product but interesting to track nonetheless) and was particularly noticeable for the swing into strong profits in Q3 as customers held onto cash given uncertainty. It’s unclear whether this profitability can be maintained into Q4.

B2W saw credit seller pre-approved levels move up to R$745m having first flagged this at the Q2 results.